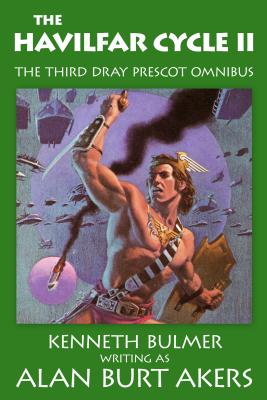 In the first Havilfar Cycle omnibus, Dray Prescot was launched headlong into a brand-new series of adventures upon the planet of Kregen, that marvelous and beautiful, mystical and terrible world four hundred light-years away beneath the Suns of Scorpio. Now Hamal, the greatest power in Havilfar, is bent on conquest, and Prescot hates the Hamalese because he slaved in their diabolical Heavenly Mines. His mission is to discover the secrets of the Hamalese airboats for his own people.

Bladesman of Antares:
The problem with being a spy is that you have to make friends with the enemy. Dray Prescot, Earthman, who had become prince of Vallia, was the kind of man who always stood by his friends. So in his quest to learn the war secrets of Hamal, empire of the aircraft-makers, Dray found himself not only becoming comrade to some of its greatest warriors but of championing the very life of its cruelly beautiful queen. Although Dray's devotion to his glorious princess Delia never flags, his mission, and his life, is perilously balanced upon the razor-edged blades of loyalty versus duty...

Avenger of Antares:
For a brief but wonderful moment it seemed as if Dray Prescot was on the road to victory, but he has not fulfilled the mission of the unseen Star Lords, and until he does there can be no escape from peril! And peril arrives in the form of hideous sea raiders, in the sharp edges of the dueling blades of a swordsman enemy, and in the horrid rites of the underground cult of the Silver Leem.

Armada of Antares:
All of the electrifying aspects of Dray Prescot's adventurous life on Kregen were to climax when the armies of Havilfar made their move toward his adopted homeland. But he has yet to fully solve the secret of their mysterious air fleets. Armada of Antares is the culmination of his experiences on Kregen so far. A peril-pitched novel of an alien world stirred up to a life-or-death frenzy.

This edition contains a glossary to the Havilfar Cycle.
Reviews from Goodreads.com