The Hand of Oberon — Roger Zelazny 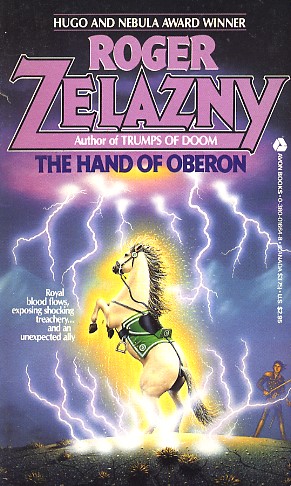 AMBER
Here is the fourth novel in Roger Zelazny's classic Amber series. Amber, the one real world, of which all others--including our own Earth--are but Shadows...

Across the mysterious Black Road, demons swarm into Shadow...the ancient, long-secret source of the royal family's power is revealed...and an unholy pact between a prince of the realm and the forces of Chaos threatens all the known worlds with absolute obliteration.

The hour of final battle is at hand. Now Corwin and the remaining princes of Amber must call upon all their superhuman powers to defeat their brother-turned-traitor before he can walk the magical Pattern that created Amber...and remake the universe in his own image.
Reviews from Goodreads.com