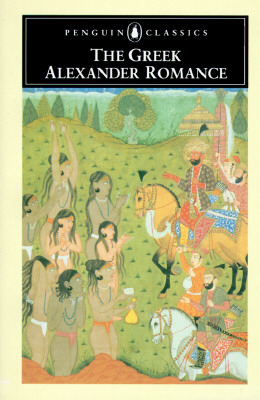 
Since his death in the third century BC, each age has woven its own legends around the figure of Alexander the Great.

If the Hebrew tradition saw him as a preacher and prophet, to the Persians he was alternately a true king and an arch-Satan, while in modern Greece he is revered more as a wise man than as a conqueror. All these very disparate traditions share roots in The Greek Alexander Romance.

One of the most influential works of late classical Greek literature, it reached Europe in the Middle Ages, and its effects are still visible to us in illuminated manuscripts and cathedral sculptures portraying Alexander's fabulous adventures - his taming of the horse Bucephalus, the encounters with Amazons and Brahmins, the quest for the Water of Life, the ascent to heaven in a basket borne by eagles. Nowadays the Romance should be read not only as a literary masterpiece but also as fast-paced and wonderfully exuberant entertainment.