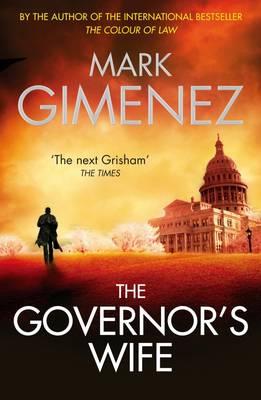 
A Texas governor wants to be president. His wife wants to escape his suffocating ambition. A Mexican drug lord wants him dead. When the drug lord abducts the governor's wife while she is working secretly as a nurse in a colonia on the border, Governor Bode Bonner must choose between his wife and the White House, between his life and hers. No. 2, IrelandNo. 8, South AfricaNo. 22, UKA breathtaking read. – Joburg.co.za (South Africa)It could have been the kiss of death--to be described as the next John Grisham--but so far Mark Gimenez has dodged the bullet. The Texas lawyer has quietly carved his own path, seemingly unworried about any expectations triggered by his debut thriller making the New York Times bestseller list. He writes legal thrillers--good ones. His latest novel, The Governor's Wife, however, is not set in a courtroom but rather the governor's mansion in Texas and the no-man's land on the border of Texas and Mexico. His hero is not a smart, quick-stepping lawyer but a jaded governor, set for life in his home state but who hankers after the adrenaline rush of one more political adventure, a tilt at the White House. . . . Gimenez's dialogue breathes street cred, his characters are larger than life, almost bigger than Texas, but it is the state itself that is pivotal. His books exude Texas. Violence hovers like the acrid whiff of gunpowder after the fatal shot. Here it explodes into massacre and betrayal in the raw world of illegal immigration, drug cartels and politics. – Dominion Post Weekend (New Zealand)Mark Gimenez delivers another powerful thriller with his latest release The Governor's Wife. . . . Gimenez has built a solid reputation for being a skilled storyteller and in this latest release he kicks things up a notch, intensifying the action, increasing the emotion and going all in with a plot that twists and turns, and creating multi-layered, captivating characters that are impossible not to care about. – Houston PressHere's a heady mix of drugs, sex, politics and gunfights played out in a modern Texas, a big tale that gallops along at mustang pace. . . . Mark Gimenez already has a reputation as a fine thriller writer and doesn't disappoint here. . . . VERDICT: HEADED FOR THE BESTSELLER LIST. – The Courier-Mail (Australia)The no-man's land hugging the Mexican border with the United States forms the pivotal area for plot. An ambitious politician; his estranged wife; a scheming political advisor; the politician's mistress; a missionary doctor, ruthless lobbyists and a vengeful Mexican drug lord, the story has all the elements in their best to keep you turning pages. . . .The biggest player, history, is least mentioned but is the most powerful driving force. The Governor's Wife is a reflection of the distribution of good and bad within us. Each character is carefully constructed with enough attention paid to detail to ensure the seamless flow of the story without compromising on the suspense. Each of them is faced with difficult choices as their personal lives are intertwined with bigger affairs in the making. -- Postnoon (India)Politics, drug lords, the rich, the poor, racism, sex, love and hate . . . The Governor's Wife has a bit of everything. . . . Mark Gimenez keeps the story cracking along at a furious pace. -- Wairarapa Times-Age (New Zealand).An intense, exciting read. - The Citizen (South Africa)The State of Texas is a world unto itself, and nowhere is more grimly fascinating than the corridor of badlands where the Lone Star meets the Mexican border. It is a constant source of material for novelists, politicians, environmentalists to name but a few. Here bestselling writer Mark Gimenez takes on the Grisham mantle with a politico-legal-romantic thriller that fairly whips along. . . . You can see the movie coming a mile away, and it'll be a cracker. – The Melbourne Review (Australia)