The Good, the Bad and the Infernal — Guy Adams 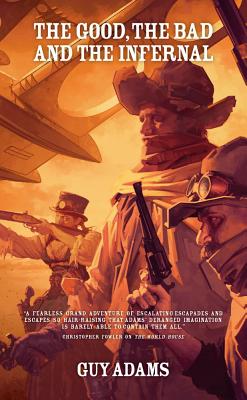 Share:
A weird western, a gun-toting, cigarrillo-chewing fantasy built from hangman's rope and spent bullets. The west has never been wilder. A Steampunk-Western-Fantasy from Guy Adams.

“You wish to meet your God?” the gunslinger asked, cocking his revolver, “well now... that's easy to arrange.”

Every one hundred years a town appears. From a small village in the peaks of Tibet to a gathering of mud huts in the jungles of South American, it can take many forms. It exists for twenty-four hours then vanishes once more, but for that single day it contains the greatest miracle a man could imagine: a doorway to Heaven.

It is due to appear on the 21st September 1889 as a ghost town in the American Midwest. When it does there are many who hope to be there: traveling preacher Obeisance Hicks and his simple messiah, a brain-damaged Civil War veteran; Henry and Harmonium Jones and their freak show pack of outlaws; the Brothers of Ruth and their sponsor Lord Forset (inventor of the Forset Thunderpack and other incendiary modes of personal transport); finally, an aging gunslinger who lost his wings at the very beginning of creation and wants nothing more than to settle old scores.

A weird western, a gun-toting, cigarrillo-chewing fantasy built from hangman's rope and spent bullets. The West has never been wilder.