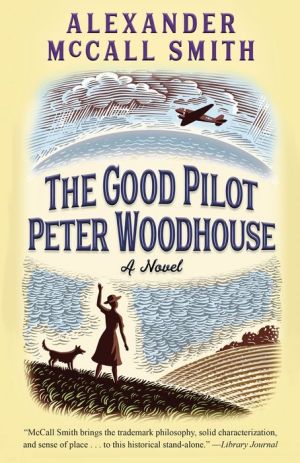 Val Eliot is working on an English farm during the war when she meets Mike, a U.S. Air Force pilot stationed nearby. The two become close, and after Val rescues a border collie named Peter Woodhouse, who is being mistreated by his owner, she realizes the dog would actually be safer with Mike. Soon Peter Woodhouse settles into his new home on the air force base, and Val and Mike fall deeply in love. But when a disaster jeopardizes the future of them all, Peter Woodhouse brings Ubi, a German corporal, into their orbit, sparking a friendship that comes with great risk but carries with it the richest of rewards.
Infused with Alexander McCall Smith's renowned charm and warmth, The Good Pilot Peter Woodhouse is an uplifting story of love and the power of friendship to bring sworn enemies together.
Reviews from Goodreads.com

“The vicar’s cracked shoes projected from under his white cassock, the hem of which was frayed, as everything was after five years of war and the shortages that war brought. There was even a smell to parsimony, some said: a thin, musty smell of things used beyond their natural life, of materials patched up, cobbled together, persuaded to do whatever it was they did well after they should have been retired. And it was true of people too – with both young men and young women in uniform, those left behind to do the day-to-day jobs seemed tired, overworked, made to carry on with their duties well after they should have been pensioned off. And now the vicar looked up at his small congregation and took a deep breath, as if summoning up for the task ahead what little energy he had left.”

The Good Pilot Peter Woodhouse is a stand-alone novel by popular British author, Alexander McCall-Smith. Nineteen-year-old Val Eliot is a Land Girl, who lives with the village Postmistress, her Aunt Annie. She’s assigned to Archie Wilkinson and working hard on his farm to help the war effort. The Americans at the nearby airbase need more eggs, so Val delivers them on her bike and, over three dozen accidentally smashed eggs, she meets an American pilot whose name, no, is not Peter Woodhouse, but Mike Rogers. Romance follows.

Meanwhile, Val’s distant cousin, Willy Birks, also staying at Annie’s house, is working at the farm owned by Ted Butters. Willy may not be the sharpest tool in the shed, but he loves animals and hates the way Ted Butters treats his. One afternoon he arrives home with a badly beaten young sheepdog, Peter Woodhouse, so named for a delightful reason not revealed here so will require reading this charming wartime romance. Because that’s just the beginning.

There’s a plane crash and a pregnancy and some brave and helpful cloggies and a German corporal who hates the war. There’s the Berlin blockade and the rescue of a good man and his nephew, and plenty more. And throughout, there’s McCall Smith’s gentle philosophy and his charming characters and his evocative descriptive prose, as follows.

“The towel was clean and smelled of something he could not quite place. And then he remembered: it was lavender. It was one of the familiar smells that had simply gone from his memory, replaced by the overpowering smells of war: smoke, burning rubber, the stink of putrefaction. There was even a smell for fear – a sharp, uneasy tang that was something to do with the sweat of frightened men. And now the smell of lavender came back to him, and as he pressed the towel to his face he felt the urge to weep.”

There’s every chance that Alexander McCall Smith could insert some gentle philosophy into his grocery list and make it just as delightful to read as this novel. Enjoyable and entertaining, as always.