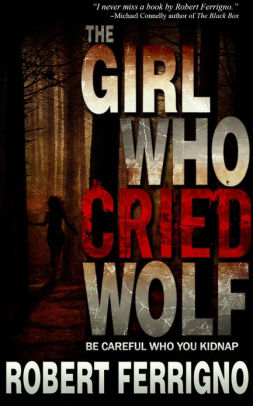 Share:
"The Girl Who Cried Wolf...is a swift thriller and a wickedly funny satire of the more fuzzyheaded wing of the environmental movement."
-The Seattle Times


Getting kidnapped on a visit to Seattle wasn't in Remy Brandt's agenda. A tightly-wound L.A. entertainment attorney, Remy has meetings to take and orders to give, but the three knucklehead environmentalists who snatch her have other plans. Remy wakes up in the middle of a national forest, resting on a platform strung between the branches of a gigantic cedar tree. The kidnappers demand that her hedgefund-manager father deed over his old growth timber holdings. Remy demands a triple-espresso and a bowl of fresh raspberries. It gets worse. Her father is dodging subpoenas for insider trading and can't be reached. Her boyfriend, left for dead by the kidnappers, can't get the FBI interested because at age 16, Remy faked her own kidnapping, and ran off with the pool boy. It's up to the boyfriend, an ex-cop with a short temper, to find her. The kidnappers should be worried about him... they should be even more worried about Remy.


"What is distinctive about Ferrigno's gripping action is that it is often set in a natural world whose appeal he makes the reader vividly feel."
-New York Times

"Ferrigno has a gift for creating confrontations of high impact and his dialogue bites hard. He balances the tough doings with a strong sense of moral outrage and compassion."
-Los Angeles Times Book Review

"I never miss a book by Robert Ferrigno."
-Michael Connelly


About the Author:
A former college professor, professional poker player and newspaper reporter, Robert Ferrigno is the author of thirteen thrillers. His first novel, The Horse Latitudes, was called "the fiction debut of the season" by Time magazine, although, to be fair, it was only May. A New York Times best-seller, his work has been nominated for an Edgar award, Best Novel, by the Mystery Writers of America, and awarded a Silver Dagger for Best Short Story by the Crime Writers Association of Great Britain. His books have been published in eighteen foreign languages, including Russian, Chinese, German, and Arabic, none of which Ferrigno can read. He lives in the Pacific Northwest with his family, working in the videogames industry and writing novels. He would like to lose twenty pounds and find a near-mint copy of Space Western #2 at a garage sale.