The Girl in Red — Christina Henry 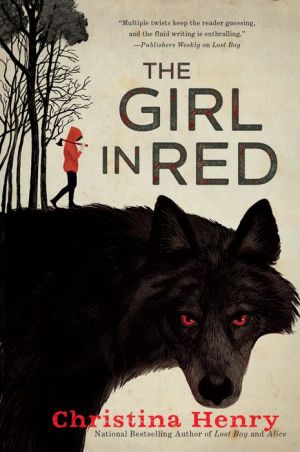 From the national bestselling author of Alice comes a postapocalyptic take on the perennial classic "Little Red Riding Hood"...about a woman who isn't as defenseless as she seems.

It's not safe for anyone alone in the woods. There are predators that come out at night: critters and coyotes, snakes and wolves. But the woman in the red jacket has no choice. Not since the Crisis came, decimated the population, and sent those who survived fleeing into quarantine camps that serve as breeding grounds for death, destruction, and disease. She is just a woman trying not to get killed in a world that doesn't look anything like the one she grew up in, the one that was perfectly sane and normal and boring until three months ago.

There are worse threats in the woods than the things that stalk their prey at night. Sometimes, there are men. Men with dark desires, weak wills, and evil intents. Men in uniform with classified information, deadly secrets, and unforgiving orders. And sometimes, just sometimes, there's something worse than all of the horrible people and vicious beasts combined.

Red doesn't like to think of herself as a killer, but she isn't about to let herself get eaten up just because she is a woman alone in the woods....
Reviews from Goodreads.com

The Girl in Red in the third stand-alone novel by American author, Christina Henry. Red is walking through the woods to Grandma’s house, alone, and the woods can be a dangerous place. There are predators, not all of them lupine. And that’s probably where the resemblance to the well-known children’s folk tale ends. This is a post-apocalyptic story, and Red a very capable twenty-year-old woman who is single-minded about reaching the refuge of her Grandma’s cabin, a trek of some three hundred miles.

A virus has taken out three quarters of the population. The government has soldiers rounding people up into quarantine camps, places Red thinks would be excellent breeding grounds for said virus, so definitely to be avoided if she wants to stay alive. And there are private militias roaming the countryside with their own agendas. Little information has been disseminated about the virus: the CDC is staying quiet, but it becomes apparent there’s more than one strain. Or maybe it’s something else that has people coughing up blood…

The narrative is split in two, with one part describing Red’s progress to Grandma’s cabin, and the other detailing the events that led up to her lone trek. Red plans her route to prevent encounters with people (they might have the virus, or their intentions might be malicious), it’s not always possible, and knowing who can be trusted is a dangerous guessing game she’d rather avoid. But she will defend herself, those she cares about, and their right to reach her destination, with every last fibre of her being.

What a marvellous version of Red Riding Hood Henry gives the reader. This Red doesn’t have to be rescued from the wolves by anyone, thank you very much! She’s self sufficient and smart and resolute. And she never lets her prosthetic lower leg limit her, if she can help it. Certain traditional elements still appear: Red wears a red hood(ie); there’s an axe, but it’s Red, not a woodsman, who wields it to devastating effect.

Red’s self-selected diet of apocalypse movies and books engenders a paranoia that actually serves her well when the Crisis (as Red refers to this apocalyptic event) happens: she’s much more ready than any of her family, even her fit (but lazy), older (but not always smarter) brother, Adam. Her familiarity with horror movies makes her determined not to be the helpless female and do something stupid, like putting down something essential, because that’s when Something Will Happen.

Many of the secondary characters are suitably nasty or annoying or dangerous, although some that Red encounters are an utter delight, and the banter between them does a great job of relieving the tension; some of the dialogue, and much of Red’s inner monologue, is blackly funny. There are Monsters, and it can get quite bloodthirsty in places. More from this talented author will be most welcome. An original and compelling read.