The Gap into Conflict: The Real Story — Stephen R. Donaldson 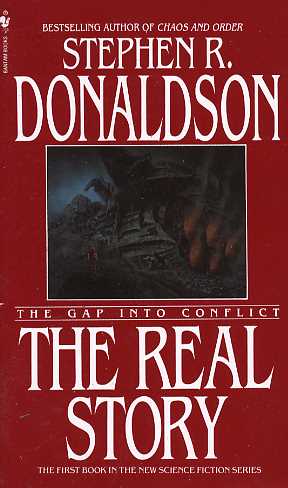 Share:
Angus Thermopyle was an ore pirate and a murderer; even the most disreputable asteroid pilots of Delta Sector stayed out of his way. Those who didn't ended up in the lockup--or dead. But when Thermopyle arrived at Mallorys Bar & Sleep with a gorgeous woman by his side the regulars had to take notice. Her name was Morn Hyland, and she had been a police officer--until she met up with Thermopyle.

But one person in Mallorys Bar wasn't intimidated. Nick Succorso had his own reputation as a bold pirate and he had a sleek frigate fitted for deep space. Every-one knew that Thermopyle and Succorso were on a collision course. What nobody expected was how quickly it would all be over--or how devastating the victory would be. It was a common enough example of rivalry and revenge--or so everyone thought. The real story was something entirely different... .