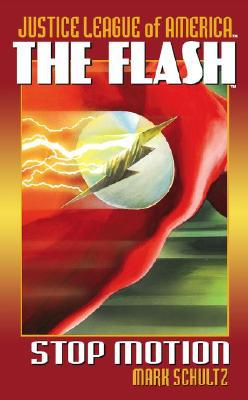 They are the world's greatest super heroes, fighting endlessly against corruption and injustice. Each of them is a formidable opponent of evil, but banded together their powers are unmatched. Ever ready, they stand united as the --

As the Flash, Wally West may be struggling to find his place within the ranks of the JLA, but he knows he has one great advantage over every trial he has ever faced: he is the Fastest Man Alive. Now, for the first time, he has met his match. A scientist has created something that can move even faster than Wally West -- and it's killing people in Keystone City. Forced to battle the one foe who can truly stay one step ahead of him, the Flash soon learns that the consequences of the creature's actions reach far beyond Keystone and threaten the future itself with annihilation.