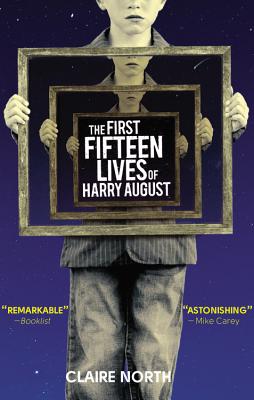 SOME STORIES CANNOT BE TOLD IN JUST ONE LIFETIME.

Harry August is on his deathbed. Again.

No matter what he does or the decisions he makes, when death comes, Harry always returns to where he began, a child with all the knowledge of a life he has already lived a dozen times before. Nothing ever changes.

As Harry nears the end of his eleventh life, a little girl appears at his bedside. "I nearly missed you, Doctor August," she says. "I need to send a message."

This is the story of what Harry does next, and what he did before, and how he tries to save a past he cannot change and a future he cannot allow.
Reviews from Goodreads.com

The First Fifteen Lives of Harry August is a novel by British author Clair North (a pseudonym used by Catherine Webb). Harry August is a kalachakra, one of a collection of extraordinary individuals who die, only to be reborn at exactly the same moment in history, to live parallel lives that loop perpetually through the same course of historical events, although experiencing changes within their own lives. Harry is even more unusual in that he has a perfect memory, accurately recalling the details of each of his previous lives when he is reborn. The reader meets Harry at the end of his eleventh life, when he is visited by a young girl needing him to take a message back in time, an urgent message about the end of the world. Throughout the book, the narration skips back and forth between the events of Harry’s next few lives and those of past lives that are relevant to the course of action he decides to take. North has written an ambitious novel that achieves everything it sets out to do. Her hero is likeable, all the more so because he is flawed and succumbs to temptation. In Harry’s many lives, he does much good, but he also gambles quite a lot, becomes a criminal mastermind, commits cold-blooded murder, suicides several times and admits his actions have cost the lives of many kalachakra. North’s extensive research into recent historical events is apparent in every chapter. As well as exploring the age-old themes of time travel and the effects of changing the past, she examines the effect on a person’s behaviour of knowing that their death is not final. Navigating the next life with the knowledge gained in previous lives may sound ideal (if I only knew then what I know now!), but Harry proves that it is not quite as successful as one might hope. This is a brilliant novel with a highly original plot and a great climax. Readers will look forward to more from Claire North.