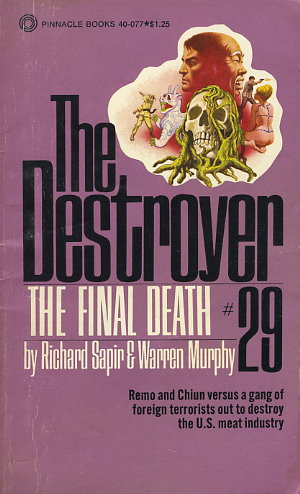 Share:
CHINESE TAKE-OUT
Death to the meat eaters of America!

That's the plan of a team of Chinese terrorists who arrive in the United States to fulfill the primary prophecy of their cult. And when a hotel full of legionnaires keel over from the effects of tainted meat, the government institutes an anti-toxin plan, under the guise of flu shots, so as not to panic everyone. But the Chinese learn of the cover and arrange it to look as if it's the flu shots that kill!

Enter Remo Williams, the Destroyer, and his teacher, Chiun, Korean master assassin, to take care of business and do some killing of their own.

But there's a problem. These are no ordinary terrorists. They are vegetarians. More than that, they are also members of a secret vampire society! Then Chiun discovers that the vampire creed is as old as Sinanju itself when the vampires decide to break their vegetarian tradition -- with Remo as the main course!