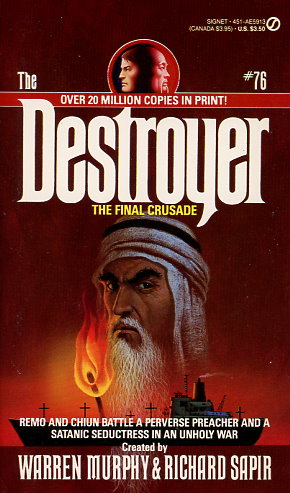 Share:
THE DESTROYER WAS BORN AGAIN -- AND WAS AS HELPLESS AS A BABY

Eldon Sluggard, the TV evangelist whose god was greed, had converted Remo to his renegade religion and enlisted him in his unholy war of conquest.

Victoria Hoar, the curvacious creature who made the minister her puppet by pulling his sexual strings, was out to turn Remo into a plaything of perpetual pleasure.

The Destroyer was in the hands of this terrifying twosome body and soul, and unless his Oriental mentor Chain could loosen their diabolical hold, Remo was going to hell in a handbasket -- and taking the world with him....