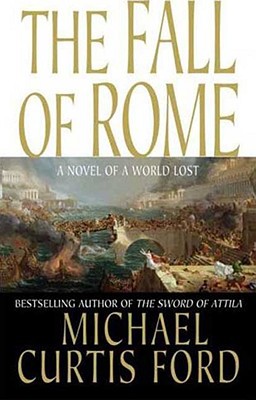 Share:
476 a.d.: The Roman Empire, riddled with corruption and staggered by centuries of barbarian onslaughts, now faces its greatest challenge---not only to its wealth and prestige, but to its very existence.

In his riveting novel The Sword of Attila, Michael Curtis Ford thrilled readers with his recounting of a cataclysmic clash of ancient civilizations. Now, in The Fall of Rome, he takes on the bloody twilight of empire, as the legacy of Attila---once thought destroyed on the battlefield---emerges again to defy the power of the Western World.

In this powerful saga of Roman warfare, the sons of Attila's great officers wage battle with one another as the dramatic confrontation between Rome's last emperor and Rome's barbarian conqueror leads to the thrilling denouement that becomes the fall of a mighty empire.

Pulsing with intrigue, saturated with historical detail, The Fall of Rome brings readers to new places--pressed into the trenches as catapult bolts fly overhead, lurking within the palace where betrayal is plotted, imprisoned in a tower stronghold where an emperor turns mad.

Once again, Ford demonstrates his mastery as a chronicler of battle, honor, and ancient worlds in this masterfully plotted epic novel that will leave readers begging for more.