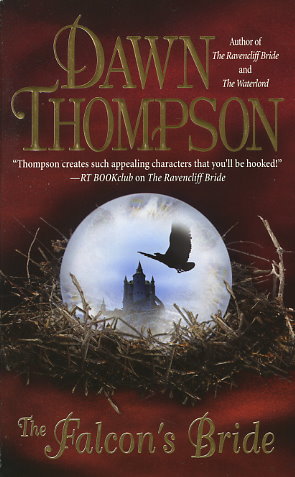 Share:
At twenty-one, after two Seasons with no takers, Theadosia Barrington should have been grateful to snare Nigel Cosgrove. The earl-to-be was a blue-eyed Adonis, a true catch-and surely the incident in Covent Garden was exaggerated. And yet, upon her arrival at Cashel Cosgrove, Thea found herself more intrigued by the Irish castle's legend, that of the tragic Ros Drumcondra. "The Black Falcon" he was called. Party Gypsy, part Celt, the warrior had been conquered by betrayal alone. His ghost was still reputed to wander these halls, making women tremble with fear and desire-for who could resist those burnished copper eyes? Hadn't he stolen away the betrothed of Cian Cosgrove, made the woman his love slave? If only Thea herself could suffer such a fate. If only magic were a reality. If only that Gypsy woman had spoken the truth, and Thea was a woman out of time, the one meant to be...THE FALCON'S BRIDE