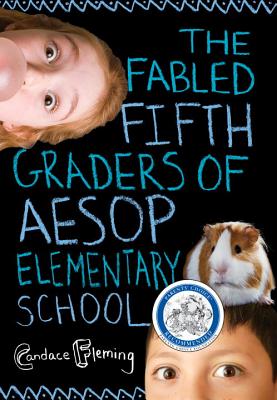 Here's a chapter book with all the kid appeal and absurd mayhem of Louis Sachar's classic Sideways Stories from Wayside School! These hilarious fables, complete with morals, will make you wish you went to Aesop Elementary.

Welcome back to Mr. Jupiter's inimitable class at Aesop Elementary. His rambunctious, special students are fifth graders now . . . and they rule the school! Bernadette Braggadoccio stirs things up when her probing investigative reporting for the school's TV station reveals some scandalous stuff. But . . . don't believe everything you hear. Is that new art teacher really a crazy lady with zillions of cats, or could there be more to this story?

For their last year at Aesop, the fifth graders are hoping for the coolest class pet -- a unicorn, a pink-headed duck, or at least a giant squid. Imagine their disappointment when they get guinea pigs. But . . . appearances can be deceiving. These guinea pigs have some very unusual traits.

So whether readers knew Mr. Jupiter's class back in fourth grade or are new to Aesop Elementary, they'll be chomping at the bit to join these fabled fifth graders for the zaniest school year ever.
Reviews from Goodreads.com