The Duke Who Didn't — Courtney Milan 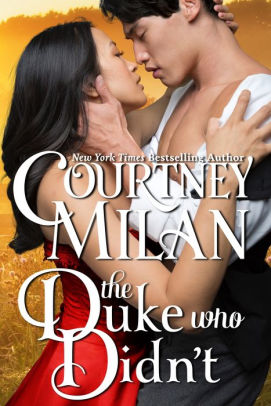 
Miss Chloe Fong has plans for her life, lists for her days, and absolutely no time for nonsense. Three years ago, she told her childhood sweetheart that he could talk to her once he planned to be serious. He disappeared that very night.

Except now he's back. Jeremy Wentworth, the Duke of Lansing, has returned to the tiny village he once visited with the hope of wooing Chloe. In his defense, it took him years of attempting to be serious to realize that the endeavor was incompatible with his personality.

All he has to do is convince Chloe to make room for a mischievous trickster in her life, then disclose that in all the years they've known each other, he's failed to mention his real name, his title… and the minor fact that he owns her entire village.

Only one thing can go wrong: Everything.