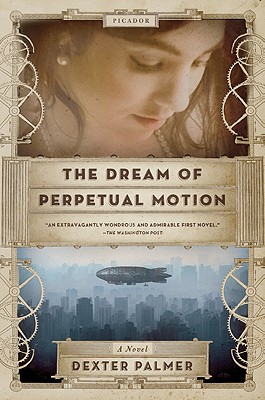 Imprisoned for life aboard a zeppelin that floats high above a fantastic metropolis, the greeting-card writer Harold Winslow pens his memoirs. His only companions are the disembodied voice of Miranda Taligent, the only woman he has ever loved, and the cryogenically frozen body of her father Prospero, the genius and industrial magnate who drove her insane.

The tale of Harold's life is also one of an alternate reality, a lucid waking dream in which the well-heeled have mechanical men for servants, where the realms of fairy tales can be built from scratch, where replicas of deserted islands exist within skyscrapers.. As Harold's childhood infatuation with Miranda changes over twenty years to love and then to obsession, the visionary inventions of her father also change Harold's entire world, transforming it from a place of music and miracles to one of machines and noise. And as Harold heads toward a last desperate confrontation with Prospero to save Miranda's life, he finds himself an unwitting participant in the creation of the greatest invention of them all: the perpetual motion machine.

Beautifully written, stunningly imagined, and wickedly funny, The Dream of Perpetual Motion is a heartfelt meditation on the place of love in a world dominated by technology.