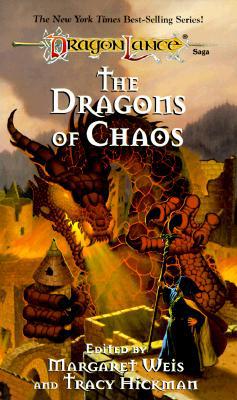 For fans of Dragons of Summer Flame, this is a new short-story collection, featuring the brave heroes, dark villains, differing races, and all varieties of dragons of one of the most popular fantasy worlds -- Krynn.

Edited by Margaret Weis and Tracy Hickman, this volume highlights familiar and beloved characters (and creatures), filling in some intriguing gaps of lost Dragonlance history.


"Eyes of Chaos" by Sue Weinlein Cook
"The Noble Folly" by Mark Anthony
"Lessons of the Land" by Linda P. Baker
"The Son of Huma" by Richard A. Knaak
"Personal" by Kevin T. Stein
"The Dragon's Eye" by Adam Lesh
"Dragonfear" by Teri McLaren
"Tavern Tales" by Jean Rabe
"The Dragon's Well" by Janet Pack
"The Magnificent Two" by Nick O'Donohoe
"There Is Another Shore, You Know, Upon the Other Side" by Roger E. Moore
"The First Gully Dwarf Resistance" by Chris Pierson
"The Star-Shard" by Jeff Grubb
"Master Tall and Master Small" by Margaret Weis and Don Perrin
"Icewall" by Douglas Niles
Reviews from Goodreads.com