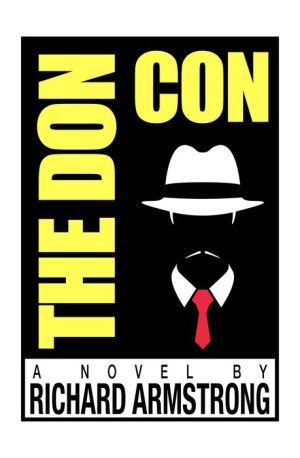 "THE DON CON is to Fan-Cons as "Galaxy Quest" is to Star Trek conventions."

"Armstrong takes his place with Henny Youngman and Rodney Dangerfield"

THE DON CON is a pure-entertainment crime comedy caper novel with all the intrigue of Ocean's 11 and The Bank Job--as well as a smart, witty pop-culture, and satire humour that riffs on The Sopranos, The Godfather, Star Trek, and The Sting.

Joey Volpe's life sucks. As an actor, he hit the peak of his career when he played a bit part as a mobster on The Sopranos. If you blinked, you missed it.

But now, at age 40, he's unemployed, broke, and forced to make a living by signing autographs at pop-culture fan conventions.  His lack of income, along with his chronic womanizing, has put his marriage at risk, too.

Joey's life gets even worse when a real mobster shows up in his autograph line and makes him an offer he can't refuse:

He forces Joey to rob all the celebrities of their cash at the next fan convention.   When the heist goes bad, the mobster frames Joey to take the fall.

With two long years in prison to plot his revenge--plus a cellmate who's an expert at running con jobs--Joey comes up with a plan to get back at the mobster, make millions of dollars for himself, and rescue his marriage in the bargain.

But if the plan fails, Joey could find himself fitted for a pair of cement overshoes.

Richard Armstrong's first book, LEAVING THE NEST (co-authored with his mother, Dorinne Armstrong) was published by William Morrow & Co. in 1986 and had five printings.

His second book, THE NEXT HURRAH, was published by Morrow in 1988.

It was praised by The Los Angeles Times as 'captivating and complete' and by Kirkus Reviews as 'one of the best books on the ramifications of the electronic political process since Joe McGinniss's 'The Selling of a President.'

Psychology Today called it 'as readable as it is disquieting.'

His first novel, GOD DOESN'T SHOOT CRAPS, was published by Sourcebooks in 2006 and optioned for film by the producers of the Broadway show "Xanadu."

His latest novel, THE DON CON, will be released by Linden/Pace in April of 2019.

A 1974 graduate of Carleton College in Northfield, Minnesota (Art History), he lives in Washington, DC with his wife Sharon and his dachshund, 'Stardust.'

Further Praise for the "Don Con"

"Sheer and unadulterated reading pleasure.  Meets the gold standard: 'Made me laugh, made me cry, I loved it!'"

"Another terrifically entertaining novel from Richard Armstrong in a new genre he seems to have either invented or perfected--the comic caper novel with clever plot twists and compelling criminal characters."

--Bob Bly, author of 95 books including "Freak Show of the Gods and Other Tales of the Bizarre"

"Richard Armstrong has done it again.  His novel GOD DOESN'T SHOOT CRAPS is one of my all-time favorites, in part because it is the only 'inside baseball' novel about direct-mail shenanigans I know of, but also because it's fun.  His newest, THE DON CON, takes us inside a different world, fueled by our insane obsession with celebrities--even barely celebrities; fan conventions like Comic-Con, the Star Trek events, and all the rest.  It's a damn funny, fun, fast-paced caper story you won't want to put down.  I envy his talent."

--Dan Kennedy, Author of the NO BS business book series, and co-author

Of the mystery novels "Win, Place, or Die" and "Speaking of Murder"