The Doctor's Family — Lenora Worth 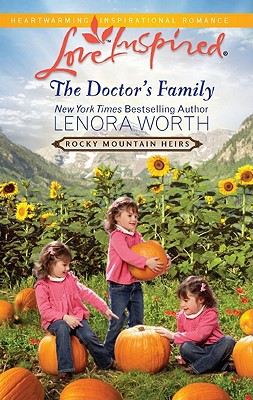 Raising four-year-old triplets and an abandoned teenager, single mother Arabella Clayton Michaels has her hands full. She loves everything about her big family in tiny Clayton, Colorado. But when a Denver surgeon arrives with the news that her beloved teenager is his long-lost niece, Arabella worries she'll lose the girl -- and much more. Jonathan Turner's harrowing past makes her want to open her heart to him. But will the handsome doctor accept a bigger ready-made family than either dreamed was possible?
Reviews from Goodreads.com

The Doctor's Family by Lenora Worth
Book 3 in the Rocky Mountain Heirs Series
Arabella Clayton Michaels was the only grandchild to stay in Clayton. She lived in the old Victorian known as “Clayton House.” She was the one who took care of Grandpa George until he died and she led him to Christ. Her husband took off shortly after she gave birth to her triplets, Jessie, Jamie & Julie. Arabella also took in Jasmine Turner after her alcoholic father abandoned her. Jasmine was now engaged to Cade Clayton, from the wrong side of the Clayton tree. The troubles that have followed the Clayton's since the Will continue in this book. And on top of everything else her mother comes to visit, a woman that left 10 years ago and never returned.

Dr. Jonathan Turner has no family but a niece he recently found out about. He has been sneaking around Clayton trying to find out about her. Jonathan left a small town like Clayton to go to Denver and make something of himself, never touching alcohol like his father and brother did. Now that he is getting to know his niece, he is also finding that not all small towns are the same, especially one with a lovely baker and three adorable munchkins.

Well, we are halfway there and I'm perplexed on some things but having an ah ha moment on another. This series is definitely one that should be read in order. Unlike some of the other multi-author series, everything is not wrapped up enough to get you through at the end. The end to this book really left us with a bunch of questions. The presence of Arabella's mother is really questionable. I personally think she's up to no good and has more than one secret hiding.

The hero in this story isn't as strong as the other two, but he's a sweetheart and is totally deserving to be welcomed into the family. I admire any man who would take on a woman with three children and a whole bushel of problems. I must say that in real life, she'd probably be staying single.

The story about Cade and Jasmine really heats up in this book with lots of action. As already mentioned, the arrival of the only living child has caused a lot of new issues and questions. The plot has thickened on the story behind Macy, Darlene's ten year old daughter.

This was another really good book, simply because of all the mystery surrounding this story. The romance was really secondary...