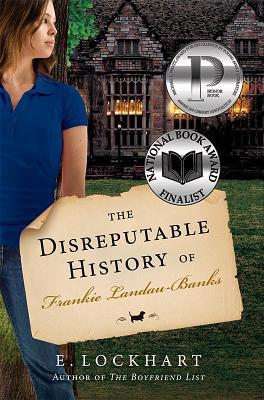 Frankie Landau-Banks at age 15:
A knockout figure.
A sharp tongue.
A chip on her shoulder.
And a gorgeous new senior boyfriend: the supremely goofy, word-obsessed Matthew Livingston.

Frankie Landau-Banks.
No longer the kind of girl to take "no" for an answer.
Especially when "no" means she's excluded from her boyfriend's all-male secret society.
Not when her ex-boyfriend shows up in the strangest of places.
Not when she knows she's smarter than any of them.
When she knows Matthew's lying to her.
And when there are so many, many pranks to be done.

This is the story of how she got that way.
Reviews from Goodreads.com

The Disreputable History of Frankie Landau-Banks by E. Lockhart tells of the evolution of a geeky young teen. Like a butterfly, Frankie has morphed over the summer from a bookish freshman into a knock-out curvy sophomore. She's got a new attitude and a new boyfriend.

I liked the fun, jaunty aspects to the story as well as the feminist viewpoint the fiesty Frankie morphs into by the end. As her body changes so does her mind and I liked watching how she finds herself through the planning and consequences of the incredibly well-executed pranking and the power that comes with it. Her pranks aren't just pesky non-destructive vandalism, but more Machaviallian works of art and well-thought commentary on the boarding school community/society in which she finds herself. I think it's telling how she keeps providing this commentary whether anyone around her understands and appreciates the depth of it or not. It's easy to see why this novel was a National Book Award Finalis and a "must read" teens working through the trials and tribulations of boyfriends.