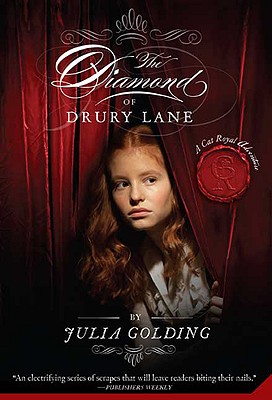 Reader, you are set to embark on an adventure about one hidden treasure, two bare-knuckle boxers, three enemies, and four hundred and thirty-eight rioters. It is told by an ignorant and prejudiced author--me.

She's Cat Royal, four foot four with long red hair and not a penny to call her own. She lives in the Theater Royal on Drury Lane, a place filled with dramatic characters, theatrical spectacles, and now, a secret treasure--which Cat has been asked to protect. Her new friend Pedro, a former slave and gifted violinist, is eager to help, and so is the theater prompter, Jonathan, who is hiding secrets of his own. But when the ruthless gang leader Billy Shepherd learns about the treasure, Cat thinks she's going to lose it for sure. She still doesn't know what the treasure is, so how can she keep it safe from Billy and his gang? Follow Cat into the streets of London, as she faces danger and adventure, racing to be the first to discover the diamond of Drury Lane!
Reviews from Goodreads.com