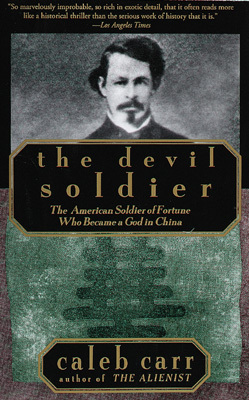 Share:
“So marvelously improbable, so rich in exotic detail, that if often reads more like a historical thriller than the serious work of history that it is.”—Los Angeles Times

With the same flair for history and narrative that distinguished his bestseller, The Alienist, Caleb Carr tells the incredible story of Frederick Townsend Ward, the American mercenary who fought for the emperor of China in the Taiping rebellion, history's bloodiest civil war. The Devil Soldier is a thrilling, masterfully researched biography of the kind of adventurer the world no longer sees.

Praise for The Devil Soldier

“If ever a book of history were made for the movies, Caleb Carr's The Devil Soldier is it.”—Chicago Tribune