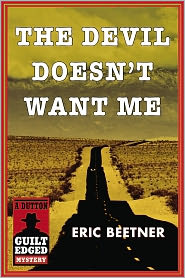 A hit man with a crisis of conscience faces his biggest challenge yet: protecting an innocent victim against deadly forces during a desperate run for the coast in Eric Beetner's thrilling novel.

For the last seventeen years, Lars has been on a job for a prominent East Coast crime family. His task: kill Mitch the Snitch. Mitch is living in witness protection and has eluded Lars for almost two decades. But changes are afoot in the family back east, and a young gun named Trent has been sent to replace the aging gun for hire.

With his old boss gone, Lars realizes he has lost the desire to kill his long-time target. When things come to a head with Trent, Lars must go on the run with Mitch's teenage daughter Shaine, trying to stay one step ahead of angry and vengeful mobsters as well as his own dark past.

With Trent, FBI agents, and even more hired muscle on their trail, Lars and his new sidekick must stay one step ahead of their pursuers by any means necessary, creating a cross country trail of wreckage and mayhem from Albuquerque to L.A.
Reviews from Goodreads.com