The Desires of Your Heart — Donna Fletcher Crow 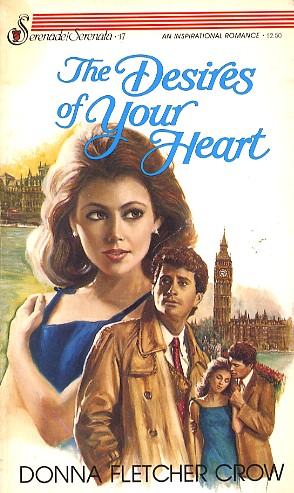 In Sandy Hollis' heart there had always been an England, but when her dream visit became reality, she was amazed at God's timing. Surely the land of Shakespeare and Jane Austen, of Buckingham Palace and Big Ben, of Stratford-on- d Avon and Cambridge was big enough to fill the void of lost love.

But Sandy's heart was bigger still--able to accommodate yet another desire--Martin Graham. Brash, rude, often cold--he thrust himself upon her idyllic English adventure with a force that brooked no argument, and she found herself intrigued with this enigmatic man.

Once burned: twice shy, Sandy's mind told her, but her heart had no ears to hear.
Reviews from Goodreads.com