The Demons in the Green — Tom Deitz 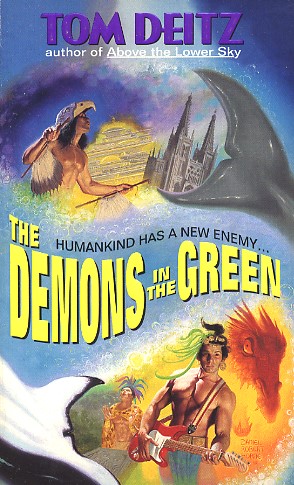 BETWEEN LAND AND WATER, BETWEEN REALITY AND PHANTASM, ONLY THE POWER OF BLOOD AND FIRE CAN SAVE THE FUTURE

The eerie death of a holy man is drawing the world's leaders to a magical Mexican city--
while predators from another reality plot the ultimate revenge...

In a near-future world of peace and promise, Thunderbird O'Connor and Carolyn Mauney-Griffith know only too well the devastating threat to humanity that has risen up from the ocean's depths. Now vengeance has empowered an already powerful foe--strengthening its mystical abilities and its determination to rid the earth of the Homo sapiens scourge. And a courageous Cherokee dancer and beautiful marine biologist who is more than human must join forces once again--to summon the ancient red and white, to experience death and resurrection... to rescue all our tomorrows from oblivion.
Reviews from Goodreads.com