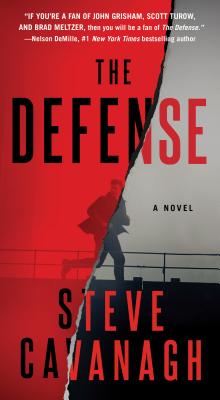 Eddie Flynn used to be a con artist. Then he became a lawyer. Turns out the two aren't that different.

Former con artist turned lawyer Eddie Flynn gave up the law a year ago after a disastrous case, and he vowed never to step foot in a courtroom again. But now he doesn't have a choice. The head of the Russian mob in New York City, on trial for murder, has kidnapped Eddie's ten-year-old daughter: Eddie has to take this case whether he likes it or not.

Using his razor-sharp wit and every con, bluff, grift, and trick in the book, Eddie has only forty-eight hours to defend an impossible murder trial. And if he loses this case, he loses everything.
Reviews from Goodreads.com

The Defence is the first book in the Eddie Flynn series by Irish lawyer and author, Steve Cavanagh. Eddie Flynn used to be a con man, a hustler like his father. Then he became a lawyer, almost a street lawyer, taking the kind of cases others avoided. But his last case broke him. It drove him to drink, broke his marriage and he hasn’t been in a courtroom for a year.

Now he’s back, under extreme duress. Olek Volcheck is a Russian Mafia boss on trial for first degree murder. The FBI has a witness, Little Benny, who will put him in jail. Volcheck’s lieutenant, Arturas has hatched an audacious plan that will stop Benny testifying, and Eddie Flynn is an integral part of that plan. He will do what he’s told because Volcheck has Amy, Eddie’s ten-year-old daughter. Unless, that is, Eddie can call up his conman skills to turn the tables on Volcheck.

Cavanagh’s first Eddie Flynn novel is a fast-paced legal thriller. He gives the reader a plot with twists and surprises, a rollercoaster ride filled with crazy elements: there’s a body bomb, an escape along a building ledge, a crooked FBI agent, a hair-raising bike ride, clever courtroom antics and big money. His smart and talented protagonist is a flawed character with a good heart who does not hesitate to act to save his daughter’s life. Luckily, he has some loyal and powerful friends when it matters. This is a real page-turner and it will be interesting to see what Cavanagh has in store for Eddie Flynn in The Plea. 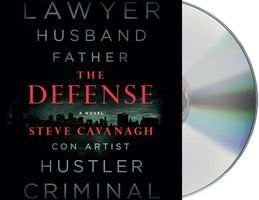