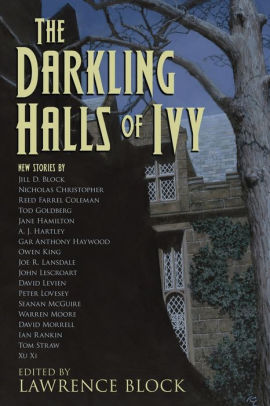 In recent years, colleges and universities have become known for their “trigger warnings” and “safe spaces”—but as the 18 authors who penned stories for this powerful new anthology can tell you, there's plenty of danger still lurking behind the stolid stonework, leather-bound volumes, and thickets of ivy. Award-winning editor Lawrence Block has assembled a Who's Who of literary luminaries and turned them loose on the world of academia, where petty rivalries and grand betrayals inflame relations between professors and students, deans and donors. From Ian Rankin to Joe Lansdale, Seanan McGuire to David Morrell, each author reveals the dark truths and buried secrets that make institutions of higher learning such a hotbed of controversy. You'll encounter plagiarism, sexual misconduct, and brutal competition—not to mention secret societies, cover-ups of murder, and one near-future course of study that makes The Handmaid's Tale look like Mother Goose.So: collect your supplies, plan your schedule, and prepare to pull an all-nighter, because The Darkling Halls of Ivy is required reading.
Reviews from Goodreads.com