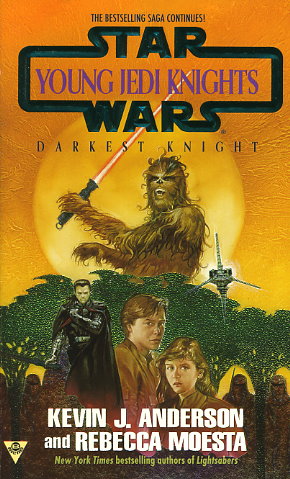 Share:
JACEN and JAINA
When the Empire died, they were born -- a new hope for the New Republic. The young twins of Han Solo and Princess Leia are now fourteen, and enrolled at Luke Skywalker's Jedi academy on Yavin 4. Together with friends both old and new, the future heroes of an already legendary saga begin their training.

The twins and Lowbacca are off to the Wookiee's home planet of Kashyyyk, where Lowie's younger sister is about to undergo the terrifying Wookiee rite of passage. The ceremony is dangerous and difficult, and he wants to help her in any way he can.

Meanwhile, the Dark Jedi student Zekk has been given his own rite of passage: to lead a raid on the great Wookiee computer center on Kashyyyk. Finally, he will fulfill his awesome potential. Finally, he will become the Second Imperium's Darkest Knight. But first he must face his old friends Jacen and Jaina, once and for all...