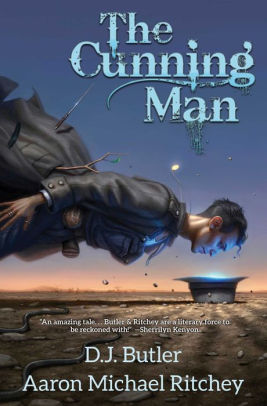 The demons of the Great Depression are real. The cunning man is here to fight them.

A BREW OF DUST BOWL MAGIC AND GRIT

It’s the depths of the Depression, and a mining town in Utah is shut down. Something has awakened underground, and now a monster roams the tunnels. While contentious owners squabble, poor worker families go hungry. Along comes Hiram Woolley. Hiram is a man with mystical abilities derived from the commonsense application of Scots-Irish folk wisdom and German braucher magic. He possesses an arcane Bloodstone that allows him to see a lie the moment it is spoken.

Behind the played-out farms and failed businesses are demons, curses, sorcerers, and unatoned wrongs. Bags of groceries and carpentry won’t be enough this time.The job will take a man who has known sorrow. A man who has known war. A man of wisdom. A man of magic.

THE JOB WILL TAKE A CUNNING MAN

About The Cunning Man:
“An attempt at charity during the Great Depression turns into a protracted fight against supernatural forces in this admirable paranormal mystery. . . . the richly imagined magic system and glimpses of Mormon culture create a fully realized world. Historical fantasy fans will delight in the zigzagging plot of this mystery.”—Publishers Weekly

"An amazing tale that grabs you by the throat and won’t let go! Butler & Ritchey are a literary force to be reckoned with! Hit that download button and grab your copy now! The Cunning Man will never let you go!"—Sherrilyn Kenyon, #1 New York Times Bestselling Author

“Butler follows Witchy Eye with a satisfying second tale of a magic-filled early America. . . . Deep and old magic influences both places and characters, and the story is tightly focused on the determined Sarah . . . Fans of epic and alternate historical fantasy will savor this tale of witchery and intrigue.”—Publishers Weekly

"For readers who love history-based fantasy, steampunk, or urban fantasy. . . this series that gives the genre a new twist."—Booklist

“Excellent book. I am impressed by the creativity and the depth of the world building. Dave Butler is a great storyteller.”—Larry Correia

“Witchy Eye is an intricate and imaginative alternate history with a cast of characters and quirky situations that would make a Dickens novel proud.” —Kevin J. Anderson

"Butler’s fantasy is by turns sardonic and lighthearted; ghoulish shadows claw into the most remote areas and heroism bursts out of the most unlikely people. Sarah is the epitome of the downtrodden hero who refuses to give up until she gets what she needs, and her story will appeal to fantasy readers of all stripes."—Publishers Weekly

"David's a pro storyteller, and you're in for a great ride."—Larry Dixon

"… a fascinating, grittily-flavored world of living legends. Hurry up and write the next one, Dave."—Cat Rambo

"This is enchanting! I'd love to see more."—Mercedes Lackey

"Witchy Eye is  a brilliant blend of historical acumen and imagination, a tour-de-force that is at once full of surprises and ultimately heart-warming. This is your chance to discover one of the finest new stars writing today!"–David Farland

"[A] unique alternative-history that is heavily influenced by urban and traditional fantasy and steeped in the folklore of the Appalachians. . . . Fans of urban fantasy looking to take a chance on something with a twist on a historical setting may find this novel worth their time."—Booklist