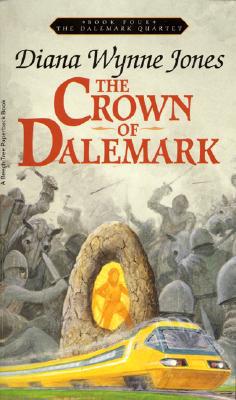 Past, present, and future jointogether to shape the destiny of Dalemark
For centuries, Dalemark has been divided. Mitt, the disillusioned young freedom fighter, is ordered to murder Noreth, who hears voices of the Undying telling her to reclaim the long vacant throne. Instead, he joins her quest, along with Moril, the musician whose instrument has magical power. But when Noreth vanishes, a girl from present-day Dalemark is thrust back two hundred years to take her place. Can Maewen, Mitt, and Moril find the enchanted objects fated to reunite Dalemark without falling prey to the ancient evil of Kankredin?"After 16 years, Jones concludes her Dalemark Quartet....Fifteen-year-old Mitt finds the North nearly as dangerous as the South, which he fled after being charged with murder. Now his benefactress wants him to assassinate Noreth, a young woman determined to claim the crown of Dalemark and reunite the country; but instead, Mitt befriends Noreth and joins her supporters....Treachery, mystery, humor, and magic abound in this intriguing, well-crafted fantasy."--Booklist.
Reviews from Goodreads.com