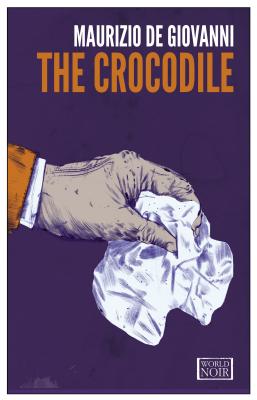 The author of the Commissario Ricciardi series “manages to conjure up the terrifying darkness at the heart of a serial killer in this chilling procedural” (Publishers Weekly, starred review).

The chaotic, shadowy city of Naples proves the perfect hunting ground for a killer dubbed “The Crocodile” by the press. Like a crocodile, when he devours his own children, he cries. And like a crocodile he is a perfect killing machine: He waits and watches until his prey is within range, and then he strikes.Three young people with very diverse backgrounds have been found murdered in three different neighborhoods, each shot with a single bullet, execution style. While his colleagues see little or no connection, Inspector Giuseppe Lojacono, smells a rat. Once an esteemed member of the mobile unit of the Agrigento police force, Lojacono was accused of leaking sensitive information to the mob and has now lost everything―first and foremost the love of his wife and daughter. But now he’s been given a second chance and a shot at clearing his name. A young magistrate has heard of his preternatural skills and his incredible powers of observation and she thinks a man like him is needed in Naples. So it is that Inspector Lojacono is charged with finding the link between the three dead bodies. At the root of these murders, he will discover, is a pain that still burns, a sense of guilt than cannot be purged, and one all-consuming love.

“A wonderfully suspenseful novel in which de Giovanni restores life to the cliché of the world-weary detective.” ―Kirkus Reviews (starred review)