The Countess and the King — Susan Holloway Scott 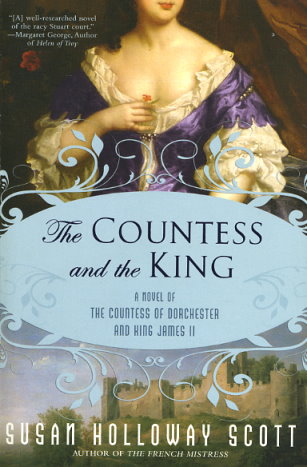 IN THE DECADENT COURT OF KING CHARLES II, KATHERINE SEDLEY WAS
A LADY WHO LIVED BY HER OWN RULES AND LOVED WHERE SHE PLEASED.

"I was still determined to make my gaudy mark on this gaudy royal court, and claim as much glory from it as any lady could. That was what I wished for myself and in my head, I brushed aside all my father's fussings of enemies and allies."

Katherine Sedley is born to wealth and privilege in seventeenth-century London, and her unconventional upbringing includes a mad mother who believes that she's the queen and a father who is one of the most notorious libertines in Restoration England. Katherine quickly becomes a favorite at the palace for her sly wit and daring, and she soon attracts the attention of the married Duke of York, His Majesty's brother. She snubs respectable marriage to become the duke's mistress, but when her lover becomes King James II, she is suddenly cast into a tangle of political intrigue in which a wrong step can mean treason, exile, or death on the executioner's block. As the risks rise, Katherine is forced to make the most perilous of choices: to remain loyal to the king or to England.
Reviews from Goodreads.com