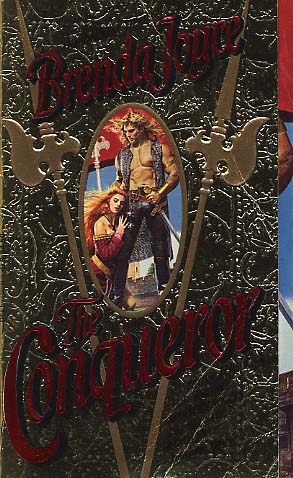 Share:
HE WAS A GOLDEN, BARBAROUS INVADER
Like a pagan god, Rolfe the relentless rode into Castle Aelfgar to claim it and the Lady Alice as his prize. Lauded for his bravery in France, in England he was the hated enemy. Once ensconced in his new domain, Rolfe became determined to tame the Saxon beauty Ceirdre, Alice's illegitimate sister, whose spirit and sensuality made him risk treason to have this woman of fire - and not Lady Alice - in his bed...

SHE WAS MORE A PRIZE THAN HE'D BARGAINED FOR
With her bronze hair and silken skin, Ceirdre seemed a wood nymph eluding the wickedly handsome knight who pursued her. Mysterious and seductive, she was no lady but a spy for the rebel cause of her noble half rothers. Refusing to bow to this arrogant warrior who ignited her forbidden passion, Ceirdre was swept into a dangerous liaison tied to the fate of England and the fate of kings....Yet with his kisses on her lips, his skillful hands on her body, she would have to struggle not to surrender to...The Conqueror.