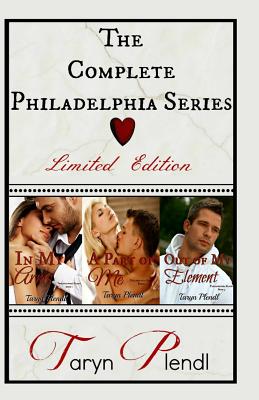 
This complete collection of The Philadelphia Series includes all 4 books: In My Arms A Part of Me Out of My Element Learning to Live Again In My Arms- Book 1 He's deliciously handsome and completely arrogant. Exactly the last thing Ava needs on her first night out following her bad breakup. New to the Philadelphia area, Trevor is instantly taken with Ava's beauty and witty attitude. After sharing an unexpected but amazing kiss, Trevor manages to stick his foot in his mouth and watches as Ava walks out of his life before he has a chance to explain. When the two unexpectedly cross paths again, they struggle with the undeniable chemistry between them. Ava fights to keep it platonic, afraid to get hurt again, as Trevor sets out to change her mind. With a little bit of humor, a lot of drama, sexual frustration, dancing and plenty of alcohol, Ava realizes that Trevor just might actually be perfect for her. A Part of Me- Book 2 You don't always need a chance at a new beginning. Sometimes you just need a chance at a different ending. Tom and Talia aren't strangers. They've been walking a tight rope of attraction since the day they met, but after an accident rocks Tom's world to the core and changes it forever, he spirals into a free fall of emotions. No longer the laid-back, happy guy, he now worries that he will never be enough for Talia. After all, who could possibly love such a broken man? Talia is a tenacious ER nurse by day and a fun-loving loyal friend and party girl by night. Her developing feelings for Tom are put to the test after his accident as she fights to break through his walls and show him how much she cares, even as he continues to build them back up, determined to keep her out. As Talia tries to take care of Tom, stronger feelings emerge for both, and neither of them will come out untouched. Everything they thought they knew about themselves and each other will be put to the test as they finally realize it isn't important how many times you fall down, but only how many times you get back up. Out of My Element- Book 3 Nick has never allowed himself to get attached to a woman. While his friends were settling down, he was having the time of his life, a womanizer with a heart of gold. Right up until Chelsea came into his life. He was drawn to Chelsea from the first time he saw her ... well, actually it might have been the second time, but it didn't take Nick long to realize he might be over his head and completely out of his element. Chelsea wrote Nick off after their first encounter, but soon she realizes she has found a good friend in him. Falling for Nick was never Chelsea's intention, but sometimes even the best intentions prove to be out of your control. The closer Chelsea and Nick get, the more they push seem to make a mess of things. Can Nick figure out how to have a healthy relationship before he loses Chelsea forever? Learning to Live Again-Book 4 Austin Montgomery lives and breathes for his career, so when his cousin Talia invites him to a quaint ski village in Colorado over the Holidays, he agrees to a much needed vacation. Rachel Dawson has spent the last year literally fighting for her life, and the idea of ten days in Colorado with her brother Trevor, his wife Ava and their friends sounds just like heaven. When the two meet at the mountain condo, they are immediately drawn to each other but with Rachel’s renewed passion for life and Austin’s inability to let go long enough to live beyond his work, their relationship is doomed before it even begins. Can Austin stop hiding behind his work long enough to explore the undeniable attraction between him and Rachel, or will his dedication to his job get in the way of the possibility of love? Will Rachel have the patience to show Austin how precious life is and what it really means to live again?