The Cauldron of Messana — D.A. Aubrey 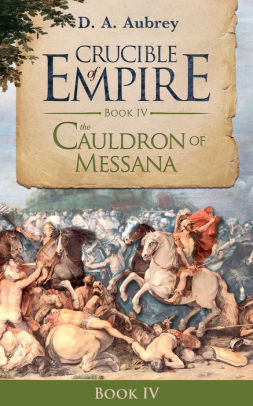 Pyrrhus, King of Epirus, King of Macedonia! Now he must eliminate all remaining contenders for his new throne.

Embittered by his loveless marriage Cleonymus, the Spartan, joins Pyrrhus in the hope that Epirot spears will secure him absolute power in the Sparta he has betrayed.

But Sparta refuses to submit to Pyrrhus. Repulsed by the Spartans, Pyrrhus is forced to withdraw to Argos, there to confront the final pretender to his Macedonian throne.

Obliged by his officers to become King of Syracuse, Hieron forges an alliance with Carthage, designed finally to destroy Messana. Fearing their ability to survive this threat, Messana seeks and is granted Roman protection. But even as the newly elected Consul of the Roman Republic, Claudius is sensitive to the nation’s mood and counsels caution.

Guided by his Greek advisers and assisted by the marine legionary Decius, he effectively conceals his intentions behind a bodyguard of deception. Slowly, he moves south with his army, to meet the destiny he has chosen for himself and for the Roman Republic.