The Case of the Kidnapped Dog — S.N. Bronstein 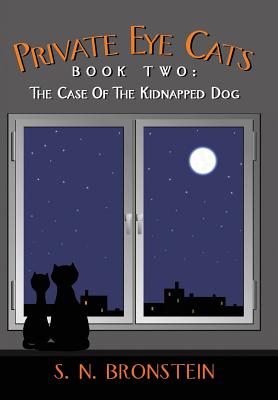 Share:
Just a few months after solving their first case as Private Eye Cats, Scooter and Nugget realize it's time to get back to work as crime fighting detectives after another mysterious crime occurs in their usually quiet Miami Beach neighborhood. Their second case, however, proves to be more puzzling and dangerous than their first. When these two feline sisters discover that a dog named Jewel has been kidnapped from her home and the police are offering little help in solving the case, they move quickly to find the thief and return Jewel to her owner. Using their ability to speak English as well as cat talk, and with the help of their human friend Tyrone Williams who worked with them on their first case, they plan a course of action. Solving this crime will be far from easy. The crime fighting cats have no idea who the kidnapper is. They not only have to discover the identity of the lawbreaker, they also have to figure out a way to contact him. Scooter, Nugget, and Mr. Williams face an additional challenge. How can they trick the thief into meeting with them so they are able to recover Jewel and have their suspect arrested? Step by step, as in their first case, our detectives work out every detail of how they will investigate this misdeed and see it to a successful conclusion. However, it seems that every stride they make in the right direction leads to a dead end, and the kidnapper turns out to be a dangerous character. Your heart will race as you follow the action. You'll wonder all along if Jewel will ever be returned. You will also be surprised at who becomes the hero of this adventure. The Case Of The Kidnapped Dog is an entertaining story for you to read and a real test of the crime detection abilities of our private eye sisters.