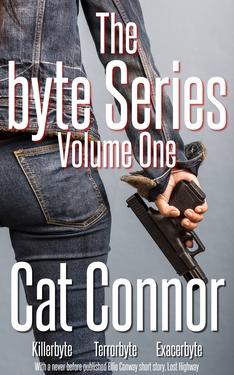 The first 3 books in the byte series with introductions by Cat Connor and a bonus short story.

Killerbyte
A killer with a penchant for inventive and macabre deaths challenges an FBI Agent with an unusual imagination and sense of humour.

Terrorbyte
Special Agent Ellie Conway is back: wisecracking, kicking ass and using her psycho-prophetic talents. This time to grapple with a murderer with ulterior motives, secreted behind a series of grotesque crimes.

Hawk has taken too many children, killed too many people. It is time to stop Him, not only to prevent the abduction of vulnerable children but to avenge the murder of an FBI agent.
Reviews from Goodreads.com