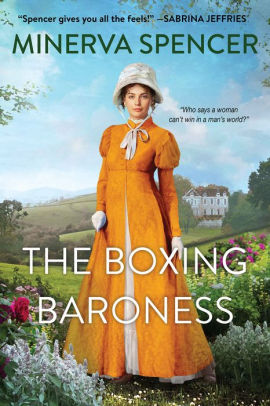 
Perfect for fans of Julia Quinn's Bridgerton books, this newRegency-set romance series features heroines of questionable birth, but possessing typically male skills -- the first of which is based on the real-life “Boxing Baroness” and her imagined romance with an undercover spy. A new generation of readers will delight in this witty, thought provoking, always entertaining novel by critically acclaimed author Minerva Spencer.

Magnetic and educated, Marianne Simpson has the manner of a lady and the looks of a lover, not a fighter. Neither of which explains her occupation as a boxer in her uncle's circus, Farnham's Fantastical Female Fayre. Nonetheless, when St. John Powell, the exquisitely handsome Duke of Staunton, begins turning up at her shows, she finds herself dangerously distracted by the powerful peer's mysterious presence. With her safety at stake, Marianne's days in the ring are numbered. But how long can she fight her attraction to the man the ton calls Lord Flawless?

St. John Powell doesn't just want Marianne Simpson, he needs her … to rescue his brother, who is being held for ransom by a treasonous English baron -- the man all of Britain knows as the Rake of Rakes. No matter how little Marianne wants to see her duplicitous ex-lover, the man responsible for the humiliating nickname the Boxing Baroness, St. John must convince her. Even if it means climbing into the ring with the beautiful boxer and taking everything she's got . . .