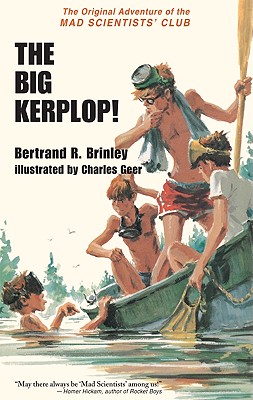 Now fully illustrated by Charles Geer with nine new drawings!
The whine of jet engines thunders from above as the giant Air Force bomber makes its approach to Westport Field. Suddenly, the citizens of Mammoth Falls are startled to see the bomb bay doors open and an object drop down, down, directly into Strawberry lake. Splash!
And what is that object? Why a bomb, what else? Not just a common, ordinary, conventional bomb, but an atomic bomb! But that's just the beginning of the latest (actually the first) madcap adventure - book-length this time - of that outrageous, notorious threat to municipal sanity known as The Mad Scientists' Club. As you know, with these boys anything can happen, and it does! This is book two in the Mad Scientists' Club series.
Reviews from Goodreads.com