The Big It and Other Stories — A.B. Guthrie Jr. 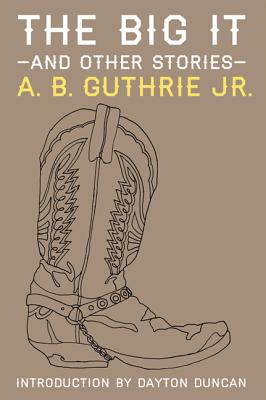 
A. B. Guthrie Jr. is best known for his historical fiction; his classic novel The Way West earned him a Pulitzer Prize. Guthrie had the ability to create memorable yet believable characters, was skillful in his use of narration and point of view, and possessed a notable flair for describing the landscape of the American West. It is unsurprising, perhaps, that Guthrie also had a deft talent for short fiction. The Big It and Other Stories collects his diverse shorter tales, written between 1946 and 1960.
Often relying on a few recorded facts as a springboard for his lively and sympathetic imagination, Guthrie explores many of his favorite themes—communion between man and nature, the test of manhood, resilience in the face of new or dangerous situations—with a sure and steady hand that always holds the reader’s interest. Full of humor and excitement, The Big It and Other Stories showcases Guthrie’s art in a new genre and spotlights the love for the West and for westerners that is the hallmark of his writing.