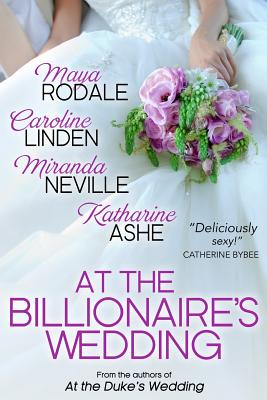 Share:
A stately home in the English countryside seems the ideal place for a bad boy billionaire and his bride to tie the knot. Until the Internet fails. And the oven breaks. And paparazzi invade. And police crash the bachelorette party. And four unlikely couples discover that passion never waits for perfection, and happily ever after is just an “I do” away."Deliciously sexy… A trip to the contemporary side of romance with historical flare." Catherine Bybee, New York Times best selling author of the Weekday Bride SeriesThe Best Laid Planner by Miranda NevilleArwen Kilpatrick gets her big break when she’s hired to organize the wedding of an old friend—to a billionaire. Arwen doesn’t have time for romance, not even with the sexy hotel handyman, Harry Compton. But putting on the wedding of the year means dealing with one surprise after another, including the discovery that Harry is so much more than he seems.Will You Be My Wi-Fi? by Caroline LindenAll Natalie Corcoran wants is peace and quiet while she writes her cookbook. The lavish wedding party at the hotel next door is driving her crazy—especially the sexy lawyer who wants her wi-fi password. But Archer Quinn is swamped with work and will do anything to convince her to take a chance on him… first with her wi-fi, then with her friendship, and then with more. But he only has a week to persuade her they'll be scrumptious together… The Day It Rained Books by Katharine AsheSwept away by a mysterious benefactor to the wedding of the year, librarian Cali Blake is living a fairytale. The only thing missing is Prince Charming. Instead the guests include the last man she wants to see—her archenemy, millionaire playboy Piers Prescott. Piers is determined to conquer Cali’s resistance to him, and he’ll stop at nothing to have her. As long as she can remember it’s just for one week, could he be the perfect wedding fling?That Moment When You Fall In Love by Maya RodaleSassy reporter Roxanna Lane might be falling for her date, sexy media mogul Damien Knightly, who just happens to be her boss. But he ruins everything by asking her to report on her best friend’s wedding. Damien Knightly is definitely falling for Roxanna, but thanks to an impulsive wager he must choose between losing the crown jewel of his media empire...or the woman he loves.