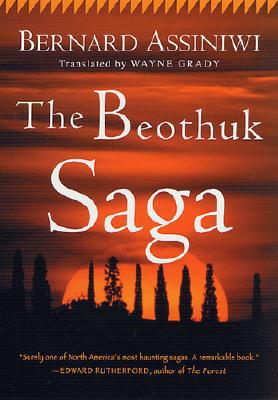 This astounding novel fully deserves to be called a saga. It begins a thousand years ago in the time of the Vikings in Newfoundland. It is crammed with incidents of war and peace, with fights to the death and long nights of lovemaking, and with accounts of the rise of local clan chiefs and the silent fall of great distant empires. Out of the mists of the past it sweeps forward eight hundred years, to the lonely death of the last of the Beothuk. The Beothuk, of course, were the original native people of Newfoundland, and thus the first North American natives encountered by European sailors. Noticing the red ochre they used as protection against mosquitoes, the sailors called them "Red-skins," a name that was to affect an entire continent. As a people, they were never understood. Until now. By adding his novelist's imagination to his knowledge as an anthropologist and a historian, Bernard Assiniwi has written a convincing account of the Beothuk people through the ages. To do so he has given us a mirror image of the history rendered by Europeans. For example, we know from the Norse Sagas that four slaves escaped from the Viking settlement at L'Anse aux Meadows. What happened to them? Bernard Assiniwi supplies a plausible answer, just as he perhaps solves the mystery of the Portuguese ships that sailed west in 1501 to catch more Beothuk, and disappeared from the paper records forever. The story of the Beothuk people is told in three parts. "The Initiate" tells of Anin, who made a voyage by canoe around the entire island a thousand years ago, encountering the strange Vikings with their "cutting sticks" and their hair "the colour of dried grass." His encounters with whales, bears, raiding Inuit and other dangers, and his survival skills on this epic journey make for fascinating reading, as does his eventual return to his home where, with the help of his strong and active wives, he becomes a legendary chief, the father of his people.
Reviews from Goodreads.com