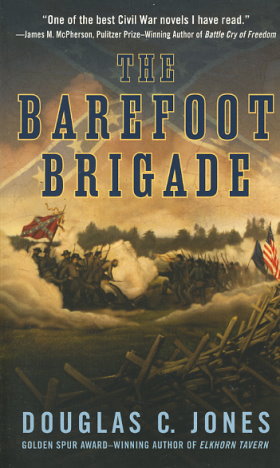 War has ripped Martin Hasford's nation apart, and, like many men, he is torn between his devotion to his family and his sense of duty. Leaving his wife and children behind to run the family farm near Elkhorn Tavern, Hasford embarks on a path from which he may never return -- and on which he meets men as embattled as himself: the Fawley brothers, young backwoodsmen running from the law; Beverly Cass, a son of plantation privilege; Guthrie Scaggs, a judge turned army officer; Sidney Dinsmore, a no-account drunk; and Liverpool Morgan, a Welsh gambler.

Together, they form a tight cadre in the Third Arkansas Infantry Regiment, trudging from the Ozark foothills, heading east into one cataclysmic battle after another -- from Chickamauga to Spotsylvania, from Gettysburg to Appomattox -- determined to beat back the Yankees and end the war.

A testament to a special breed of American, The Barefoot Brigade is a work of undeniable and lasting power.
Reviews from Goodreads.com