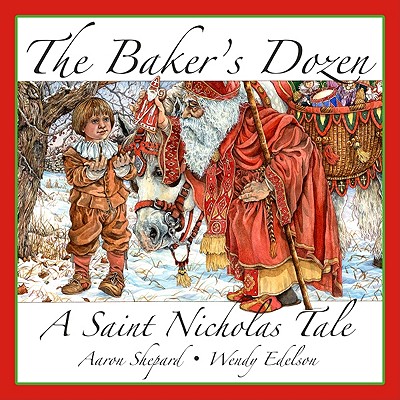 Van Amsterdam the baker was well known for his honesty as well as for his fine Saint Nicholas cookies. He always gave his customers exactly what they paid for -- not more, and not less. So, how could he agree with a mysterious old woman on Saint Nicholas Day when she insists that a dozen is thirteen?
The woman's curse puts an end to the baker's business, and he believes it would take Saint Nicholas to help him. But if he receives that help, will it be exactly what he imagined?
Find out in this inspiring legend from Dutch colonial New York about the birth of an honored American custom.
/////////////////////////////////////////////////
Aaron Shepard is the award-winning author of "The Sea King's Daughter," "The Legend of Lightning Larry," "The Adventures of Mouse Deer," and many more children's books. His stories have appeared often in Cricket magazine, while his Web site is known internationally as a prime resource for folktales, storytelling, and reader's theater.
Wendy Edelson has applied her award-winning skills to a wide range of illustration projects, including picture books, pet portraits, posters, puzzles, and fabric design. Her clients have included Seattle's Woodland Park Zoo, the Seattle Aquarium, the Pacific Northwest Ballet, the U.S. Postal Service, and the American Library Association.
/////////////////////////////////////////////////
American Bookseller Pick of the Lists
Trumpet Book Club selection
Valerie and Walter's Best Books for Children
"The good will of legendary Saint Nick resonates in this tale about the origin of the term 'baker's dozen.' . . . Shepard's easy-to-follow retelling has an appropriate Old World flavor." -- Publishers Weekly, Sept. 18, 1995
"A particularly nice holiday story accented by paintings full of detail. . . . Well-paced and a good length for groups or individuals, this is right on target for audiences. Edelson's artwork is filled with marvelously-alive characters who almost step from the pages." -- Ilene Cooper, Booklist, Sept. 15, 1995
"A lush new version of a traditional tale. . . . Well-chosen words and a nicely-paced text that begs to be told aloud. A treat for the holiday season." -- School Library Journal, Oct. 1995
"Aaron Shepard retells a favorite colonial legend with the voice of the storyteller." -- Jan Lieberman, TNT, Fall 1995
"A fine tale of generosity for St. Nicholas Day or any day." -- Marilyn McPhie, Storybag, Special Review Issue 1997
"A story with a message to be heard during the holidays and all year long." -- Children's Book Review
/////////////////////////////////////////////////
SAMPLE
One Saint Nicholas Day morning, the baker was just ready for business, when the door of his shop flew open. In walked an old woman, wrapped in a long black shawl.
"I have come for a dozen of your Saint Nicholas cookies."
Taking a tray, Van Amsterdam counted out twelve cookies. He started to wrap them, but the woman reached out and stopped him.
"I asked for a dozen. You have given me only twelve."
"Madam," said the baker, "everyone knows that a dozen is twelve."
"But I say a dozen is thirteen," said the woman. "Give me one more."
Van Amsterdam was not a man to bear foolishness. "Madam, my customers get exactly what they pay for -- not more and not less."
"Then you may keep the cookies."
The woman turned to go, but stopped at the door.
"Van Amsterdam However honest you may be, your heart is small and your fist is tight. Fall again, mount again, learn how to count again "
Then she was gone.
Reviews from Goodreads.com 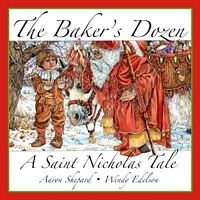 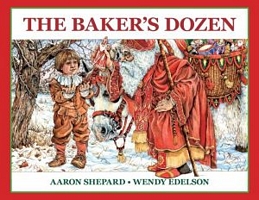 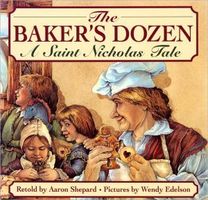 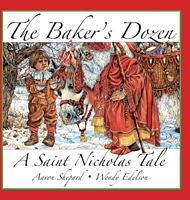 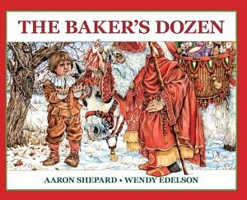