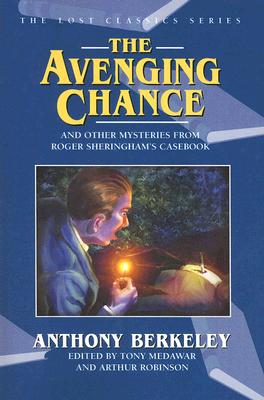 Detection in the Golden Age!!!
In 1930, Anthony Berkeley Cox (1893–1971) founded London’s Detection Club, whose members swore that their "detectives shall well and truly detect the crimes presented to them, using those wits which it may please you to bestow upon them." The Detection Club pledged "never to conceal a vital clue from the reader."
Anthony Berkeley’s novels and short stories featuring Roger Sheringham and Inspector Moresby are among the finest examples of the fair play, challenge–to–the–reader tradition of the Golden Age. Berkeley punctiliously presented all the clues to the reader, but as Tony Medawar and Arthur Robinson point out in their introduction, he loved showing that clues could be interpreted in multiple ways — and Sheringham is often wrong in his conclusions.
The title story in The Avenging Chance has long been considered one of the five or six greatest formal detective stories. This book also collects seven additional cases of Sheringham and Moresby, one of which ("The Mystery of Horne's Copse") is a recently discovered novelette. Also included are Berkeley’s own tongue–in–cheek satire of the Sheringham stories and a complete checklist of the Sheringham novels and tales.
The Avenging Chance is the eleventh in Crippen & Landru’s Lost Classics series. Cover illustration by Gail Cross. Lost Classics design by Deborah Miller.
Reviews from Goodreads.com