The Art of the Impossible — Keith R.A. Decandido 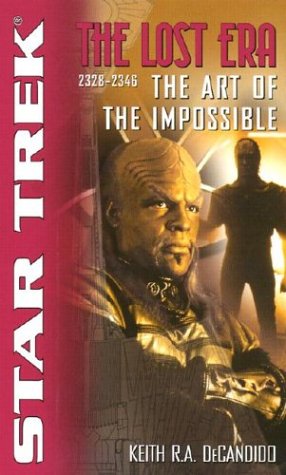 THE YEARS ARE 2328-2346
To the Cardassians, it is a point of pride. To the Klingons, a matter of honor. But the eighteen-year cold war between these two empires -- euphemistically remembered in later years as the Betreka Nebula "Incident" -- creates a vortex of politics, diplomacy, and counterintelligence that will define an age, and shape the future.

What begins as a discovery that would enable the Klingon Empire to reclaim a lost piece of its past becomes a prolonged struggle with the rapidly expanding Cardassian Union, which has claimed dominion over a region of space that the Klingons hold sacred. Enter the Federation, whose desire to preserve interstellar stability leads Ambassador Curzon Dax to broker a controversial and tenuous peace -- one that is not without opponents, including Lieutenant Elias Vaughn of Starfleet special ops.

But there are wheels within wheels to the drama unfolding in the Betreka Nebula. Within the shadowy rooms of the Cardassian Obsidian Order, Klingon Imperial Intelligence, and even the Romulan Tal Shiar, secret scales are being balanced -- and for every gain made for the sake of peace, there will come a loss.
Reviews from Goodreads.com