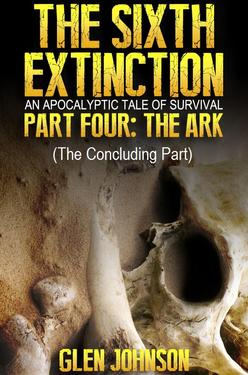 The concluding part to The Sixth Extinction Series.

A pandemic has swept the globe, decimating humanity, affecting all who breathe in its deadly spores. There are four stages to the virus. The third stage, where the host human becomes a frenzied, animalistic eating machine, is sweeping the country. However, the creatures have changed; they are no longer unorganized; they are working together, with a deadly agenda in mind.

Doctor Lazaro has been shown The Ark, and told of its founding, and deadly secret. General Philips has summoned her, along with Doctor Hall, to the main hub control room, where she is about to witness the American president do something so shocking she can only stand and watch in stunned, horrified silence.

Noah, Red, Betty, Lennie, and the Squad are making their way through Princetown to get to Dartmoor Prison.

Betty sits silently inside the truck, slowly changing into something they all fear. In her pain-wracked state, she can hear voices in her head.

When the truck arrives, they realize they may already be too late; thousands of creatures are swarming around the prison, clawing at the stonewalls with bleeding hands – something has called the horde together. Then before their eyes, the creatures do something unimaginable, making it possible for them to breach the prison walls and pour inside.

Time is running out. They need to get below ground before it is too late.

In the chaos, decisions and sacrifices have to be made.
Reviews from Goodreads.com