The Ancient One — T.A. Barron 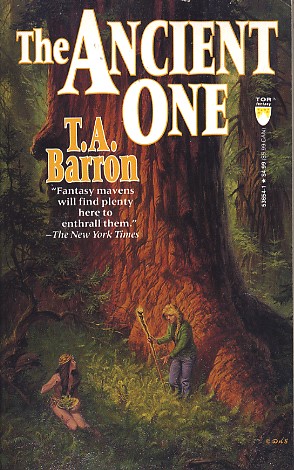 When Kate travels to Blade, Oregon to spend a quiet vacation with her Aunt Melanie, she has no idea of the adventures that lie ahead. Blade, Oregon is the home of the magical Lost Crater, in which a grove of giant redwood trees has remained untouched for thousands of years. Now the ancient grove has become the center of a major dispute between those who wish to save this rare sanctuary and the local loggers who see Lost Crater as their last hope to rejuvenate their dying mill town. Caught up in the struggle, Kate feels compelled to learn more and decides to follow a trail into the crater, which, as legend has it, was made by the ancient Halami people believed to have once lived in the region. But for Kate, what starts out as a day's discovery soon turns into a life's journey. With the help of an ancient walking stick, Kate is thrust back in time five hundred years. Quickly befriended by a young Halami girl, Laioni, Kate learns that not much has changed in five centuries as she is caught in the middle of a battle for the same wilderness. Con-fronted by a myriad of strange and frightening creatures, including the trickster Kandeldandel and the evil Gashra, who is bent on destroying everything he cannot control, Kate must complete her quest and return to her own time. But to do so, she must not only discover the truth behind her own beliefs, but also unravel an ancient and wondrous riddle bearing the knowledge of life's intricate and fragile balance.
Reviews from Goodreads.com